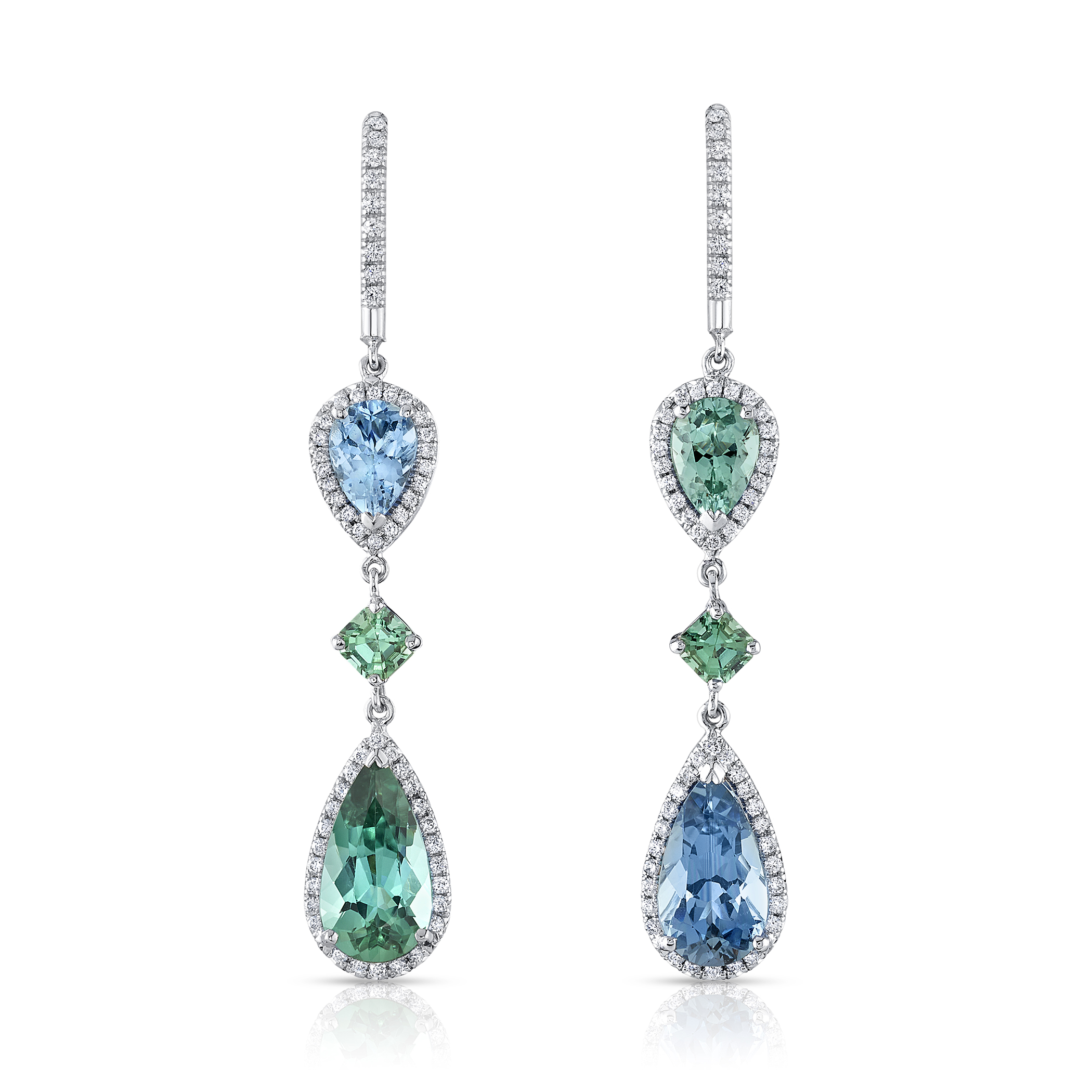 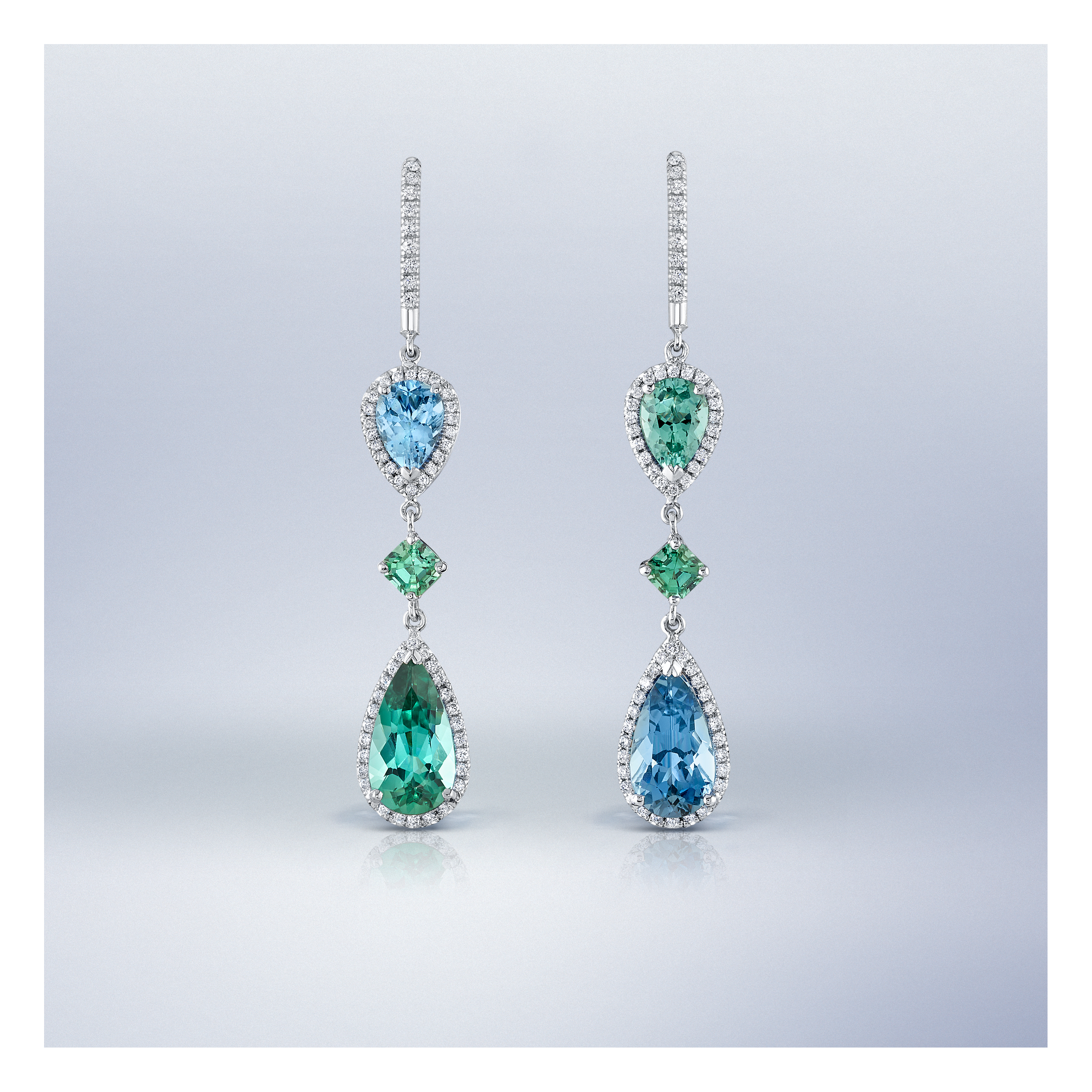 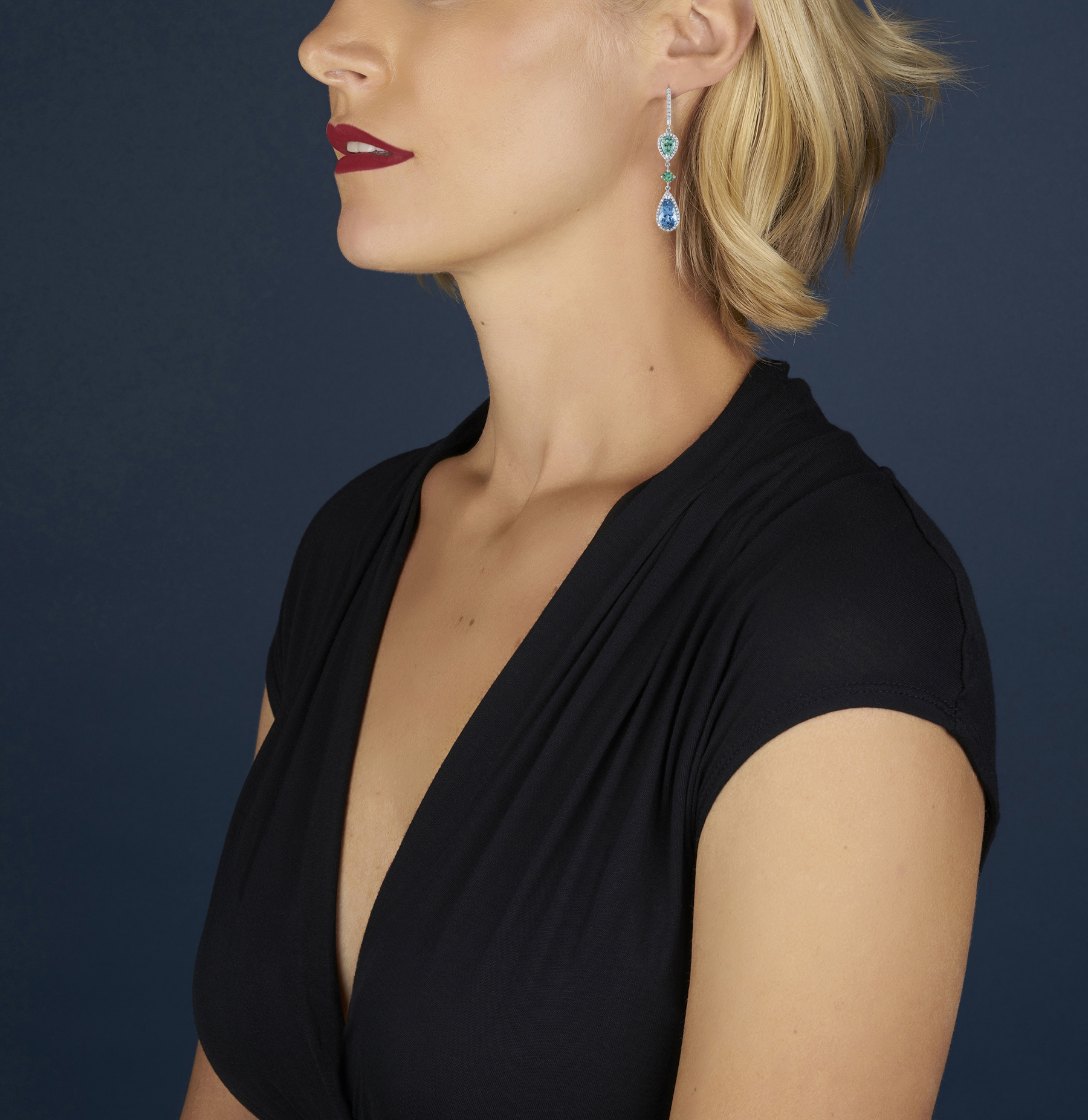 The mismatch of the Aquamarines and Tourmalines create a unique look that is truly on-of-a-kind.

The design incorporates asscher-cut green tourmalines inbetween each pear-shape to match the tone of the aquamarines and add a pop of unique color.

The very name aquamarine brings to mind the clear blue waters of the sea. Unsurprisingly, since its name derives from the Latin words aqua marina for "water of the sea," the Greeks and Romans considered aquamarine the sailor’s gem, believing it would ensure safe and prosperous passage across stormy seas.

It is the blue member of the beryl mineral family, which also includes emeralds, morganite and heliodor. With a 7.5 to 8.0 hardness on the Mohs scale, aquamarine is a durable gemstone that has featured in jewelry designs for hundreds of years. Often found in large clean crystals, it can be readily found and purchased in larger carat sizes relative to some other gemstones.

Many aquamarines are greenish when mined and cut. For those who prefer a purer blue, these gemstones are heated to enhance their blue color permanently. Some prefer the greenish hues, saying the greener tones remind them more of the sea. The color tones of aquamarine are subtle and varied. Their soft luster is a wonderful addition to any natural colored gemstone jewelry collection.

Aquamarine is the birthstone for March and gift for the 19th wedding anniversary.

Tourmaline is a gemstone that comes in a seemingly endless variety of shades and colors and in fact can occur in almost every hue. Many colors have inspired their own trade names, such as the pink, red, purplish red and orangish red tourmalines known as ‘rubellite’, while dark blues, violetish blues and greenish blues are referred to as ‘indicolite.’ The vivid green shade of tourmaline is known as ‘chrome’ although its color is usually attributed to vanadium, not chromium. Parti-color and watermelon tourmaline will display multiple color blocked hues.

First reportedly discovered in the 1500s by Spanish explorers in Brazil but mistaken for emerald; it took until the 1800s for scientists to distinguish it as the green variety of tourmaline. Its name even reflects this confusion, derived from the Sinhalese word "turmali", which means ‘mixed.’ For centuries tourmalines have adorned the jewels of royalty. The Empress Dowager Tz'u Hsi, the last empress of China, valued the rich pink colors above all other gemstones.

Recent discoveries of new hues in Brazil have propelled tourmalines’ popularity among gem and jewelry lovers, particularly the vivid blue of Paraíba tourmaline. Tourmaline is one of the few gems to be mined in the United States, with significant deposits found in Southern California.

Tourmaline is a birthstone for October and the gem of the eighth anniversary.